THIS BOOK IS FINALLY BACK IN PRINT.   IT IS NOW IN ONE LARGER VOLUME OF 1,700 PAGES!

A ground-breaking reference book for physicians, professionals, and patients alike.

Do you specialize or are you thinking of specializing in homeopathic cancer treatment? Do you take an occasional cancer case but wish to learn more? Then this book is for you!

Homeopathic Cancer Drugs is the first clinical materia medica written specifically with the homeopathic oncologist in mind. It contains every fact the homeopathic cancer specialist needs to know in order to treat cancerous pathologies safely, and with a higher degree of success.

Homeopathic Cancer Drugs contains over 600 remedies and is the most thorough reference work on homeopathic cancer drugs to date. It lists all drugs that have ever been used for the homeopathic treatment of cancer either in clinical practice, case studies or compiled from more than 100 years of homeopathic literature.

It is the first time the symptoms from the homeopathic materia medica have been listed in the context of modern medical categories including additions from current scientific research. It contains the broadest, most up-to-date, most complete, and most accurate array of data the practitioner needs to reliably select an effective remedy for the pathology of each individual case of cancer. 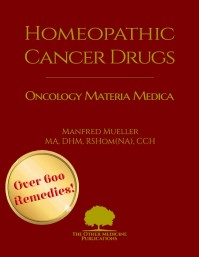 The oncology materia medica is intended to be used as a reference work for the active clinician, as well as for the general public.  Updates will be done periodically.

This book is shipped SEPARATELY from all other books or medicines you purchase from us.  Other items will incur a separate shipping charge, though we will do all we can to keep this second shipping charge as little as possible.  Please email us at email@homeopathic.com to inquire about special shipping charges for separate items. 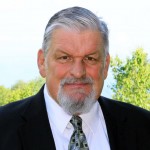 Mr. Mueller is a professional homeopath in a private practice. Mueller began his homeopathic training in 1979. He mentored with world-renowned homeopaths, including Francisco Eizayaga, MD, of Argentina (post-graduate training in advanced clinical management), and Georg von Keller in Germany. His training also includes post-graduate studies at the British Institute of Homeopathy (BIH) and a preceptorship at the Royal London Homeopathic Hospital.

Over the past 25 years, through his clinical observations and research, his special method of practice, called “The Mueller Method™” was developed. The Mueller Method™ is a fast, efficient yet extremely powerful method of homeopathic practice that is particularly effective in curing complex cases such as cancer, iatrogenically induced disorders and chronic health problems of modern industrial society. Manfred’s training program, The Homeopathic College, offers distance-learning modules in his innovative perspective.

Indications. For cancer of the colon, rectum, lungs, blood, and for cancerous affections, large-cell carcinoma and lymphocytic leukemia; in withdrawn patients, who feel cut off from others and retreat to their own world; with guilty or worthless feelings, and dreams of burglars; who have difficulty expressing themselves to others; make mistakes while writing or speaking; thin, weak, anemic patients with the carcinic taint, and a history of surgery, radiation therapy, chemotherapy, and heavy metal intoxication; to antidote their adverse effects; prone to malaise, severe, long-lasting fatigue, emaciation, anemia, anorexia, weight loss, lassitude, heaviness; muscle weakness, diffuse muscle atrophy, myopathy, gait disturbances;  muscular and nervous damage, and multiple neuropathies and neurological disorders; worse from exercise, better from warmth; worse or better on waking

Mind: Difficulty expressing self to others. Mistakes while writing or speaking. Feeling cut off from others. Retreats to his own world. Guilty or worthless feelings. Dreams of burglars.

Clinical Notations. Germanium is an immune modulator and enhancer and has attributes of oxygen enrichment and antioxidant properties. It has been used to stimulate the immune system, and for treatment or diseases such as cancer, AIDS, rheumatoid arthritis, and lupus erythematosus. Organic germanium has been clinically shown to stimulate the production of immune (gamma) interferon; activate resting macrophages and convert them to cytoxic (killer) macrophages; stimulate natural killer cell activity, the production of T suppressor cells, and to augment decreased immunity and restore impaired immuno-response in aged mice. It also enriches the body’s oxygen supply and is a potent antioxidant, properties which contribute to this trace element’s widespread beneficial effects upon many interrelated metabolic processes of the body.

Organic germanium has been shown to protect against this heavy metal and radiation poisoning by “capturing” heavy metal positive ions in its negatively charged oxygen ions and discharging the poisonous molecules. It counteracts environmental toxins, such as mercury from dental amalgam for fillings, and household products such as thermometers and batteries; lead, in paints, pipes, automobile and industrial exhausts; cadmium, also found in batteries; and radiation from atmospheric fallout, medical and dental procedures, and industrial uses of radioactive products, such as irradiation of food….

Cancer research studies have shown that, at a cellular level, in animals and humans, the evidence for organic germanium’s anti-cancer properties is solid and reproducible. Tests have shown that organic germanium inhibits DNA RNA and protein synthesis of these cancer cells at very low concentrations. Other studies have shown its positive results against colon, lung and myeloma type cancers, and also to increase the lifespan of animals with certain types of cancers, by activating immune mechanisms, including macrophages, natural killer cells, interferon and T suppressor cells.Sher

Pharmacology. Germanium is a lustrous, hard, grayish-white metalloid of the carbon group, chemically similar to its group neighbors tin and silicon. Purified germanium is a semiconductor, with an appearance similar to elemental silicon. Like silicon, germanium reacts and forms complexes with oxygen on nature. Unlike silicon iy is too reactive to be found naturally in the free (native) state. It was discovered in 1886 by the German chemist Clemens Winkler, along with sulfur and silver, in the rare mineral argyrodite. Winkler named it germanium in honor of his country.

Germanium is used as a semiconductor in electronics. It is also used in fiber optics, infrared optics, and in solar cells. Germanium compounds are applied in nanowire production, and for polymerization catalysts. Since it forms a large number of organometallic compounds germanium has found wide application in organometallic chemistry. Germanium is nephrotoxic, and compounds with halogens and hydrogen are irritants and transdermal toxins. Germanium supplements have been marketed as an alternative treatment of leukemia and lung cancer.